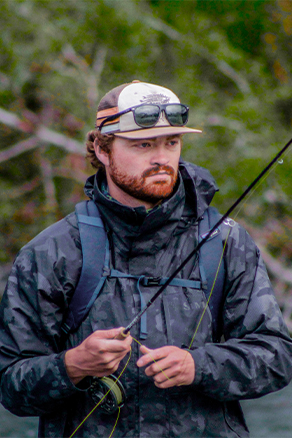 Cole grew up in a small town in west Michigan where over 150 lakes reside within the county lines. From a young age, he discovered a burning passion for chasing down a fish. This mostly revolved around fishing inland lakes for bluegill, largemouth bass, and northern pike. He recalls watching Robert Redford's "A River Runs Through it" at a young age and the art of fly fishing was introduced. His parents said they had won a packaged Shakespeare fly rod at a company Christmas party years before he was even born. Hearing that, he dug it out of the garage and the rest is history.

When he’s not on the water, Cole enjoys camping, golfing, listening to music, snowboarding, and really anything that keeps him active. Cole attended Central Michigan University where he studied business and marketing. During his summers in college, he lived/worked in some pretty awesome places. He worked as a Videographer in Colorado for a whitewater rafting company and on a dude ranch in western Montana. He also worked as a Sea Kayak Guide on Maine's coastal waters of the Atlantic Ocean. His most recent adventure brough him up to Alaska where he guided salmon and trout fly fishing trips for Kenai River Drifters Lodge. This is where he fell in love with guiding others.

Cole is actually a full-time Content Specialist on the marketing team here at Boyne Mountain Resort and he will periodically assist as a guide for Outfitters. As he decribes it, getting out of the office to share his fly fishing knowledge and stoke with others is invigorating! He loves to share the excitement fly fishing can offer.