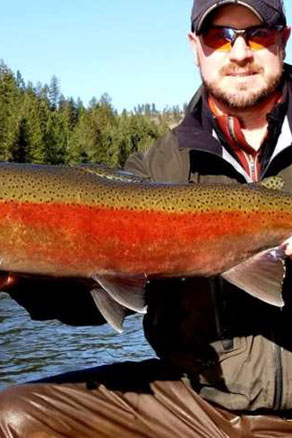 Jake grew up fishing the classic trout waters of Montana.  Ever since he picked up his first fly rod, Jake has been fascinated with all aspects of fly fishing including water ecology, entomology, fly tying, and of course...catching fish!

Fly fishing has given Jake the opportunity to guide on many different waters. Starting on the Bighorn river in Montana, to the Wind River Canyon in Wyoming and the Nushagak River in Alaska. After spending a summer as the head guide at Dave & Kim Egdorf's Western Alaska Sportfishing camp on the 'Upper Nush'. Jake spent the next 12 summers managing and guiding his family's fishing camp on the lower Nushagak. He also taught elementary education and coached for nearly a decade in western Montana - guiding each summer season in between.

Jake joined the Boyne Outfitters crew in the summer of 2014 when he and his family relocated to northern Michigan.  Jake now spends his off-season as the Building Trades & Woodshop teacher at Petoskey High School.  When he is not guiding for Boyne Outfitters during the summer months, Jake spends his time with his two boys and wife either building something, playing in the water, or fishing.

The one thing Jake enjoys the most about guiding is how excited people get when it all comes together and they feel the tug, whether it's their first fish ever or the fish of a lifetime.  "That is why I guide."