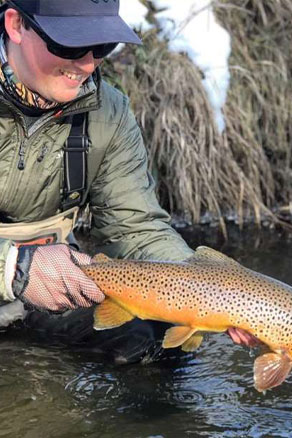 Travis' passion for fly fishing began on the headwaters of the fabled Blackfoot River of Montana at an early age. For several weeks each summer, it was all about chasing cutthroat through the icy-cold mountain streams. When not in Montana, Trav was at home trailing his dad around Michigan's Au Sable... chasing the hatches and learning the beauty of what Michigan has to offer.

Summers were quickly consumed by sleepless nights, lots of bug spray, and plenty of stories of "the one that got away." His desire to become a better angler trumped his desire for much anything else. Fortunate enough to find a career as an engineer in Northern Michigan became a dream realized, knowing that being a stone's throw away from northern Michigan waters meant days off could easily turn into fishing adventures.

Trav decided to give back to the rivers that have provided him endless joy by joining his local TU chapter - Headwaters Trout Unlimited - where he is now the Treasurer of the organization. However, he wanted to take his skill set a step even further, and joined the Boyne Outfitters team in 2020. He is driven by a desire to share his experiences and give others the same pleasure that fly fishing has offered him over the years.